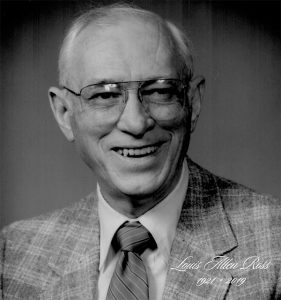 Louis Allen Ross, who, for 36 years, was a fixture at Pensacola State (Junior) College as a professor, assistant Registrar and Registrar, died Nov. 16 at the age of 98. Ross also established and coached the first basketball program at the College. He helped establish and served as Florida NJCAA Regional Director of Athletics.

Our beloved Coach Lou Ross, for which our building complex is named, has passed away at the age of 98.

Coach Ross spent his whole professional life at PSC, all 39 years of it. He was the Grandfather to the FCSAA, long-time College Registrar, started our nationally recognized athletic programs and was our first basketball coach.

The College recognized his contributions by naming our sports complex, (gym, locker rooms, offices, pool and training rooms) in his honor.

There was never a dull moment around Coach, nor were there any sad episodes. Always upbeat and cheery, he was a role model for what every Pirate Fan should be and a FAN he was!

Coach died seven days after his wife of 72 years, Jean, passed away. Several years ago they moved to Tennessee to be closer to their children, grandchildren and great-grandchildren.

He helped so many along the way. What a wonderful life he led.