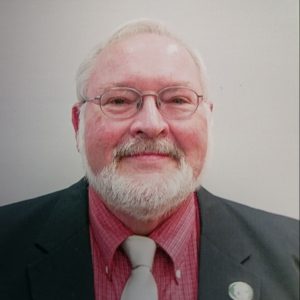 David T. Sutton attended Pensacola Junior College in Political Science (Pre-Law) and transferred to the University of West Florida and completed that degree. Following UWF, he moved away and was involved in recreational real estate and radio syndication. After a number of years, he returned to Pensacola and UWF’s graduate program in Organizational/Industrial Psychology. In 1980, he began as an adjunct instructor in Psychology at Pensacola Junior College, now Pensacola State College. In 1982, he added a half-time position as an academic advisor/recruiter to cover Naval Air Station (NAS) Pensacola, Corry Station and Saufley Field. In 1985, he became the full-time Military Liaison and began the groundwork for what became the college’s NAS Center. As Director of Military Programs, he initiated classes onboard NAS Pensacola, Corry Station, Naval Hospital, Saufley Field (including the federal prison) and NAS Whiting Field. In this office, he created and implemented programs that allowed sailors to take classes despite their unpredictable lives and schedules. He became coordinator of Veteran Services and retired from Pensacola State College in October 2011. He is co-founder and Director of Behavioral Services and Operations of the People’s Medical School at UWF. This organization is committed to patients being better informed about health care and strong patient advocacy. Professional memberships are the Association of Psychological Science, Southeastern Psychological Association, and Florida Advisory Council on Military Education. He is a Lifetime Charter Member of the PSC Alumni Association. He has been a PSC Alumni Association Board of Directors member since 2017.