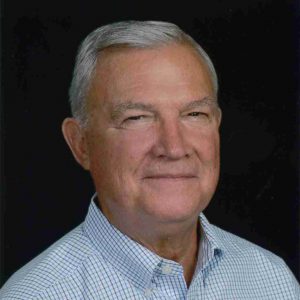 Denis McKinnon, Sr. graduated from Escambia High School (1959) and attended Pensacola Junior College from 1960 to 1961. After a bright start at PJC now PSC, he entered the United States Marine Corp Aviation program in 1961, quickly earning the Naval Aviator Designation. His military career was replete with achievement and success. He served two tours in Vietnam, earning over 30 personal combat decorations during his 20 years as a naval aviator, including a Purple Heart and a Meritorious Service Medal, and was honored with a selection as aide to President Gerald Ford during the Michigan politician’s appointment as the House of Representatives minority leader.  In parallel with his many military achievements, he pushed himself to continually pursue higher education. His studies at PSC enabled him to experience success. He earned a bachelor’s degree from the University of Southern Mississippi, followed by a Master of Business Administration from the University of West Florida, and finally postgraduate studies at Nova Southeastern University. In 1981, after retiring from his distinguished military career, he returned to Pensacola. He immediately began establishing himself as a community leader, serving as president of First State Bank Share and First State Bank and its subsequent transition to Wells Fargo. He was recognized as the Kiwanis Pensacola Business Leader of the Year and was the recipient of two PACE awards – 1989 Business Leader of the Year and 2004 Spirit of Pensacola. He served as the president of the Sacred Heart Foundation and of the United Service Organization. He developed and built the PSC childcare enter and served as member of the Pensacola State College District Board of Trustees. He is the president of Veterans National Homecare. He has been a PSC Alumni Association Board of Directors member since 2019.