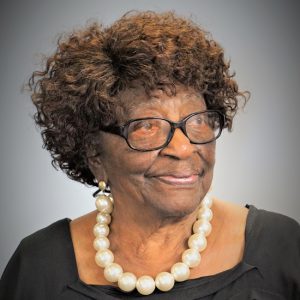 Marie Young is a Pensacola legend who has dedicated her life to education and the community. She has served on the Pensacola City Council and was the first African American woman to serve on the Escambia County Board of County Commissioners. But even before she was an elected official, she had already built a legacy of service ─ having taught in the Escambia County School District for more than 40 years.  “I loved teaching and always strived to be a great teacher,’’ she said. “My goal was to make sure my students were becoming the best that they could be.” She eventually became a school administrator and, later, a principal. She is a Pensacola native who graduated from Booker T. Washington High School in 1951 at age 15. She attended Booker T. Washington Junior College graduating in 1953. The College merged with Pensacola Junior College in 1965. She is a Lifetime Charter Member of the PSC Alumni Association. After Booker T. Washington Junior College, she earned a bachelor’s degree in elementary education at age 19 from Florida A&M University. She later received her master’s degree in elementary education from Atlanta University. Her entry into politics came in 1997 when she was elected to the Pensacola City Council. Three years into the term, she was appointed by then-Florida Gov. Jeb Bush to fill the District 3 Escambia County Commission seat that had become vacant. She would be elected to the position in 2004 and was re-elected in 2008. Following her retirement in 2012, the Escambia County Commission honored her legacy with the naming of the Marie K. Young Wedgewood Community Center and Park in the Wedgewood community. Her community involvement is vast. Young has served on boards for the WSRE-TV Foundation, the Council on Aging of West Florida, the Area Housing Commission and the Community Equity Investment Board. She met the Rev. James S. Young at his church, Mount Canaan Baptist Church, in the late 1950s. They were married in 1960. Rev. Young was a prominent area civil rights crusader who died in 2018. Her commitment to service and the community has been lifelong. “I think it is important to be a servant to your fellow man,’’ she said. “I’ve been blessed with a servant’s heart and want to serve others. You can’t be an effective leader unless you show some real concern for other people.” She has been a PSC Alumni Association Board of Directors member since 2015. She was voted to the Emeritus Board position in 2020.