Brother Mike Thomas opened the ceremony with a warm welcome and introduced Gaines, who was Delta Kappa Alpha’s Pledge Bond No. 1. After giving a brief history of the chapter, Gaines related his personal experience.

“Watching the unveiling of the Delta Kappa Alpha permanent display cabinet was a deeply moving experience. It affirmed my belief that what we do in our lives really matters. Most of us were only 18 or 19 years old when DKA was founded,” said Gaines following the unveiling. 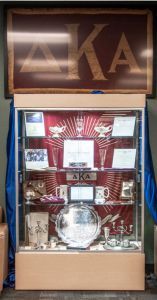 “Who were we to think that the principles of our fraternity would have such a powerful influence on so many lives ─ not only the founding 13 ─ but also the hundreds who would follow in our footsteps? My counsel to anyone, especially our young people, is whenever you do something, do it so that it benefits others. Who knows, in 58 years or so, you too may be blessed to see the fruits of your labor.”

Meadows delivered a State of the College message to guests, expressed appreciation for their support and asked each Delta Kappa Alpha brother to introduce himself and his guest and share his PSC/PJC story.

Meadows also recognized Whitten who congratulated the fraternity and recognized the Lifetime Charter Members in attendance. She also thanked them for establishing the Delta Kappa Alpha scholarship fund.

Following the cabinet dedication, Brock and Gaines announced Meadows was named an Honorary Delta Kappa Alpha Brother at an executive meeting. Meadows came forward and was welcomed into the fraternity with the official handshake. He was thanked for supporting the fraternity, the cabinet project and for his leadership at the College.