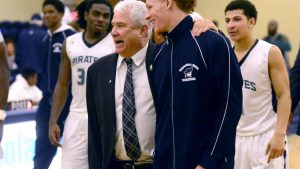 When the Orlando Magic’s roster was devastated by COVID-19 in December, the NBA team called on former Pensacola State College basketball star Hassani Gravett to help.

The Magic signed Gravett, a player for the Magic’s G League affiliate the Lakeland Magic, to two 10-day contracts. The first was signed on Dec. 17, 2021, and the second on Dec. 27, 2021. Both contracts have expired and Gravett is back with the Lakeland Magic. Still, Gravett made an impact with the NBA squad.

PSC men’s basketball coach Pete Pena, now in his 12th season, thinks Gravett will be seen in the NBA again.

“He played very well and had a great showing,’’ said Pena, who talked to Gravett “every other day” during his time with the Orlando Magic. “He even started a few games and I know the team was impressed with him.”

Gravett played in eight games – starting three – and averaged 6.3 points, 2.6 rebounds and 2.5 assists – each game. The team’s record this season is 7 wins and 35 losses. The Magic were 2 and 6 during Gravett’s eight games. 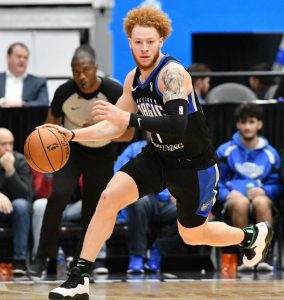 Gravett played for PSC during the 2015-2016 season and was named the Panhandle Conference Player of the Year. He then signed with the University of South Carolina and was a member of the Gamecocks’ 2017 NCAA Final Four team – South Carolina’s first appearance in the Final Four.

South Carolina lost to Gonzaga University in its semi-final game. The University of North Carolina defeated Gonzaga in the championship game.

He is the first Pena-coached PSC player to play in the NBA.

“I’m proud of what he’s accomplished as a player,’’ Pena said, “but I’m even more proud that he was 1st-team SEC Community Service Team, which recognized his volunteer work with the Special Olympics, Epworth Children’s Home, Palmetto Children’s Hospital, Wounded Warriors and many other ventures.

“That’s one of our kids. That’s Pensacola State College. His unselfishness and generosity are truly outstanding. I’m very proud.”