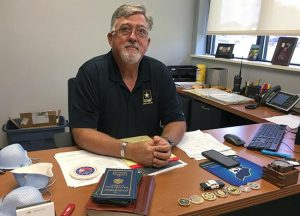 There’s a new lawman in town to keep the peace.

OK, it’s not that dramatic.

Pensacola State College isn’t a town, after all. But it is a community. And it’s a pretty peaceful community as it is. So new PSC Chief of Police Robert Goley wasn’t hired so much to police the students, faculty and staff as he was to protect the PSC family. After all, he’s been part of the family since he came to then-Pensacola Junior College as a teenager just after graduating from Pensacola Catholic High School in 1980.

“He has a polish to him,” said Tom Gilliam, PSC Vice President of Administrative Services and General Counsel. “He’s very laid back and down-to-earth, but at the same time he has that polish. He’s a great fit for Pensacola State College.”

Goley began his new job on Aug. 3 after spending two years with the Valdosta State University Police Department, where he was also the university’s Emergency Management Specialist. He spent 25 years with the Florida Fish and Wildlife Conservation Commission, and is a retired U.S. Army colonel, serving both in active duty and reserve forces.

While in the Army, he served in Operation Desert Shield/Desert Storm in the Middle East. He also deployed to Panama, Bosnia-Herzegovina, Hungary, and the Horn of Africa.

“It’s my hometown,” Goley said from his office on the Pensacola campus, though he’s PSC’s head honcho for all campuses and centers. “And this is my alma mater. I still have family here. I love the people and have a lot of friends here. I’m really happy to be back.”

Both Goley and Gilliam said policing college and university campuses is different than normal community policing.

“I said this in my interview, an academic environment is different,” Goley said. “You need to encourage civil debate on campus and get to know each other. There’s a lot of social mistrust of law enforcement in general right now, so we need to be more inclusive. And a college campus is naturally inclusive. We’re part of PSC. The students and faculty are going to see us, and they get to know us. We need to be seen as an asset and not an adversary.”

Gilliam agreed, saying part of a college police officer’s job is much more about protecting students, faculty and staff than policing them.

“He’s worked in higher education and knows this environment,” Gilliam said. “I believe that Chief Goley’s recent experience in higher education gives him an insight into the needs of a college and its students, and his dual careers in law enforcement and the military give him the law enforcement and leadership skills necessary to supervise our Public Safety Department.”

Goley’s educational resume as a student includes an Associate of Arts degree from then-PJC and a Bachelor of Arts in Criminal Justice from the University of West Florida. His is currently working toward his Master of Science degree in Leadership and Emergency Management from Grand Canyon University.

“I’m going to be getting out of law enforcement one of these days,” Goley said. “So I really would like to help shape and mold the next generation of officers. We want to be partners on campus. That’s the goal.”