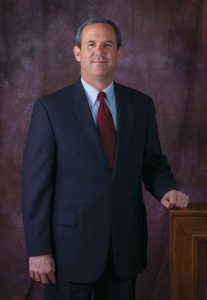 Patrick Rooney says he had some “amazing teachers” during his days at what was then Pensacola Junior College in the early ’70s.

One of those teachers of whose memories he remains quite fond was a math instructor, Mary Pfeiffer.

Pfeiffer knew Rooney was a star math student and was, in fact, the head of the math tutoring subcommittee for the Phi Theta Kappa international honor society. Still, she was perplexed when it came to Rooney.

“She could not fathom why an A student would want to go into accounting and not become an engineer,” Rooney says.

The answer to that question is an interesting one, says the entrepreneur and business coach who operates the Co:Lab Pensacola business incubator and Coastal CxO Services consultation firm.
“It’s very simple, actually,” says the newest member of the board of PSC’s Alumni Association.

“I had a spinster aunt who lived in Brooklyn. When I was young, she started buying me a couple of shares of stock in really big companies. She would actually get the stock certificates, these big, ornate, paper certificates, and mail them to me.  In addition, I would get reports from these companies –we’re talking about Scott Paper, AT&T, etc. — and even dividend checks, although we’re not talking about a lot of money. Still, to get money in the mail made a big impression on an 8-year-old.”

Rooney was fascinated, not just with the cash, but with the numbers themselves. Earnings, sales, trends and deficits were to Rooney like the adventures of a superhero would be to other youngsters.
“I wanted to understand what those numbers meant,” he recalled.
So the young Rooney tackled the numbers and became hooked, forging the beginnings of a long career that would have him working for a number of companies around the world.

“At the beginning, I used to call it 13th grade,” he says of his early PJC days. “PJC at the time reminded me of O.J. Semmes, where I went to school. I grew up on 12th Avenue in Pensacola.”
He remembers Underwood Avenue, the famed street just to the north of the Pensacola campus, being, at the time, “just a washboard road, almost a dirt road.” He says he and a buddy — Rooney in a souped-up Volkswagen Beetle and his pal in a Karmann Ghia — would drag race in the area.

“PJC was really just about going to school. I was making some money but spending it on my girlfriend. But it was a great time. I just loved it.” He says his two fondest memories were the instructors who helped him, Pfeiffer and accounting teacher Louise Wise.

“And I’ve really liked the presidents at PJC/PSC over  the years.”

Rooney graduated from PJC with an Associate in Arts in business in 1974. He then attended the University of West Florida, where he took advantage of the school’s robust co-op program, which allowed him to travel and work in other cities, like Omaha, Nebraska, “just in time for the worst blizzard in 20 years.”

These days the entrepreneur devotes the bulk of his time to guiding and nurturing other entrepreneurs.

“I do it because I am an entrepreneur myself,” says the Tiger Point resident.
“Large companies are great, but in my experience, it’s all about, ‘Let’s do the same thing we did last year,’ so innovation and creativity are not their strong points. I wanted to work with more innovative problem solvers.”
When it comes to problem-solving, he refers to himself on his About.me web page as a practitioner of “Thaumaturgy.”

In the fantasy world, thaumaturgy is the realm of magicians or saints. In the real world, a thaumaturgist is, simply put, a miracle worker.

“A lot of entrepreneurs get in over their head and they don’t have the experience to know what to do,” Rooney says.

“That’s where the miracle work comes in. It’s knowing how to tell the entrepreneurs that they will survive.”