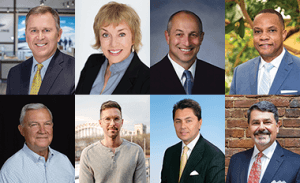 Eight highly-accomplished Pensacola State alumni were recognized at the College’s 2019 Distinguished Alumni Awards Gala held Saturday, May 4, in the Jean and Paul Amos Performance Studio on the Pensacola campus.

“Building on Tradition – Investing in the Future” was the theme of the inaugural event where alumni were recognized in five categories: Spirit of Pensacola, Rising Star, Life Achievement, Hometown Hero and Against the Odds.

Denis McKinnon Sr., was the recipient of the Spirit of Pensacola State College Award.

One of Escambia County’s most respected residents, McKinnon is proof that Pensacola State, is ready when you are.

“PJC was the time when I became an adult, it was one of the best things to ever happen to me,” said McKinnon, a 1959 Escambia High graduate who attended PJC from 1960 to 1961.

After leaving the College, he enlisted in the U.S. Marine Corps and earned his Naval Aviator designation in 1963. McKinnon served two tours in Vietnam and was awarded more than 30 personal combat decorations, including a Purple Heart and a Meritorious Service Medal.

Following a 20-year career as a naval aviator, McKinnon was an aide to President Gerald Ford during the Michigan politician’s appointment as the U.S. House of Representatives Minority Leader.
After returning to Pensacola, McKinnon established himself as a community leader and advocate – helping wherever needed. He was named the Kiwanis Pensacola Business Leader of the Year, received two PACE Awards ─ 1989 Business Leader of the Year and the 2004 Spirit of Pensacola and numerous other accolades.

However, McKinnon’s devotion to the College has been evident.

“I’ve had the opportunity to come back and serve on the Board of Trustees, and sat on the committees that selected Charles Atwell and Dr. (Thomas) Delaino as presidents,” he said.

The highlight of his service to the College, he said, was helping to procure a $1 million donation from the Lamar, Switzer and Reilly families in 2014. The donation served as seed money for the construction of the $3 million Charles W. Lamar Studio which opened in 2017.

“PJC was a stepping stone into my future,” said Olesky who was excited to be back where his foundation in graphic design was set.

“I learned how to present myself, follow directions and leadership and guidance from people who were smarter than me. I feel like I have these certain gifts and palates, and I needed guidance to help understand how to use them,” said Olesky, who after graduating from Pensacola State, earned a bachelor’s degree from the Savannah College of Art and Design.

Life Achievement Awards were presented to Gary A. DeLapp and Jarl “J.T.” Young.

● DeLapp who rose from a teen hotel dishwasher to hold several executive posts in the hospitality industry, also had the Gary A. DeLapp Alumni Scholarship established by his family and friends.
“I’m just blown away … but I’m not done yet,” said DeLapp, who fondly remembered pledging a fraternity while a PSC student. “One thing that impacted me more than anything else was getting initiated into Delta Kappa Alpha. That relationship and the bonds that we had – that brotherhood was second to none.”
The $151,200.64 DeLapp Endowed Scholarship was made possible by donations totaling $75,600.34 and matching contributions of $62,500 by the PSC Foundation and $13,100.34 by the PSC Alumni Association.”

● Being selected for the honor was humbling for Young, CEO and president of Memphis (Tennessee) Light, Gas and Water.
“This award is for my family and the community,” said Young, whose family has a long history with the College. His wife, Deidre, was a member of the PSC Board of Trustees; his uncle, a College instructor; and his father, a devoted WSRE supporter.
“We’ve had this legacy of affection,” Young, an engineering major, said of the College. “… By the time I got to the University of Florida, I realized that the classes I took here were much harder there. This foundation prepared me to be able to compete successfully at the University of Florida.”
Young and his wife, Deidre, established the Aspire Higher Scholarship to assist African American students who major in STEM or business-related fields. The $12,500 gift also will be matched by the PSC Foundation.
Selected as Hometown Heroes were Gulf Breeze Mayor Cherry Finch and Escambia County Sheriff’s Office Chief Deputy Chip Simmons.

● PJC was “the right place for me,” said Finch, a retired educator, community advocate and Realtor.
The boomerang student (Finch attended the College first as a freshman and then returned as a single mother) said she was honored to be a member of the inaugural Distinguished Alumni class.
“One day when I came back, I was walking across campus, and it was just so beautiful and peaceful – everyone was friendly. The support I received here when I came back – from the professors and the advisors – gave me the confidence to go on to the University of West Florida, which resulted in me becoming an English teacher at Gulf Breeze High School the week after I graduated,” she shared. “I grew, and I came to love it here.”

● Simmons attributes much of his success to the College.
“Literally, every professional achievement that I’ve been able to accomplish has had its roots in my time at Pensacola Junior College,” said Simmons who started his career as a corrections officer in 1984 and retired as Pensacola Police Chief in 2015. He was sworn in as chief deputy in December 2016.
“If it were not for Pensacola State College, I wouldn’t have what I have. I wouldn’t have the wife I have.”
Along with earning a degree, Simmons also met his wife, Susan, while a Pensacola State student.
Beré Jeweler owner Barry Cole and Northwestern Mutual wealth management advisor Thomas Vaughn received the Against the Odds awards.

● Cole, the owner of Beré Jewelers, chose Pensacola State over the University of Alabama.
“Something tugged at my heart and said I couldn’t go … I ended up staying here for a girl, who I ended up marrying, so it worked out awesome,” said Cole, who opened Beré Jewelers with partner, the late Ray Jones, in 1985.
Cole said it was the right decision and led him to where he is today.
“It may not even be in the classroom, it was the things I did,” he said of his days as a PSC student. “I remember the days of playing flag football behind the tennis courts with Owen Farley, who was my history professor. It was such a great feeling to know everybody.”

● Pensacola State was “a place of transition” for Vaughn, a U.S. Air Force veteran. “It was really part of a growing up stage. This was adult-based education,” explained Vaughn who credits Pensacola State with helping him learn how to earn his way out of a loving but disadvantaged childhood.
“We didn’t have air conditioning, she didn’t have indoor plumbing, and I saw what poor really was,” he said of a childhood visit to his grandmother’s home in Red Level, Alabama.
When Vaughn enrolled in Pensacola State, he had been in the Air Force for three years. And at one point, he spent his days at the College, evenings at Troy University, and nights working a midnight shift.
“Through the College’s placement and career services, they (PJC) got me in touch with my industry. It was because of Pensacola Junior College that I ended up in the career that I am in,” he added.

Sue Straughn, a WEAR-TV anchor, was the mistress of ceremonies and Patrice Whitten, PSC’s Executive Director of Alumni Affairs, welcomed honorees to the gala where the Edward Meadows Meritorious and the Delta Kappa Alpha Fraternity Alumni scholarships were announced.

Pensacola State President Ed Meadows congratulated the inaugural class on the induction as well as their accomplishments.