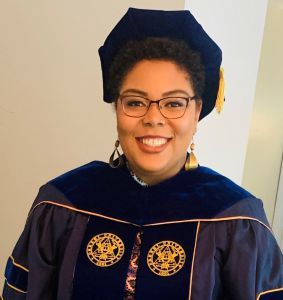 Dr. Rasheda Likely always was interested in a career in science. A self-described curious child, she “asked why” and questioned just about everything.

Today the Pensacola native and Pensacola State College alumna has reached her goals. This summer, Likely earned a doctorate in philosophy in educational leadership and learning technologies in STEM concentration from Drexel University in Philadelphia. And this fall, she became an assistant professor of science education at Kennesaw State University in Georgia.

“I have always loved figuring out how things worked. From trains to ant farms to telescopes to computers to the human body, I have enjoyed being curious about things from an early age,” said the daughter of recently-retired PSC Assistant Director of Human Resources Rhonda Likely.

“There were many days when my mom took us to the library on the PSC campus to check out books. Days that she worked late, my sister and I got to expand our thoughts through library books. She even would check out science textbooks from PSC’s library for me. This is how I taught myself to read ultrasounds, EKGs and X-rays in high school.”

Dr. Likely earned her associate degree from PSC in 2008, and bachelor and master’s degrees in biology from the University of North Florida in 2011 and 2014, respectively. She is a 2006 graduate of Pensacola Christian Academy.

“When I first left for Jacksonville, I wanted to attend medical school afterward. However at the end of my junior year, I had become disillusioned with the process of obtaining a medical degree,” she admitted.

“After completing some of my core classes in the pre-med/biology track, I realized in order to maintain my curiosity and deep respect for the science discipline, I needed to distance myself from the standardized entrance testing and competition necessary for medical school.”

Instead of med school, Dr. Likely applied to the university’s Master of Science Program. It was there where she worked in a research laboratory for 2 ½ years investigating sugar transport in lobster intestine.

“It was a very cool project in digestive physiology,” Dr. Likely explained, but the young scientist was destined for greater things.

After earning her master’s degree, she worked for the Florida Department of Health’s Virology Lab ─ during the Zika virus outbreak. She also found time to mentor at an after-school program in the Jacksonville area.

“Three of my student-mentees did not believe I was a scientist because ‘scientists are old white men.’ At the time I was applying to doctorate programs in biochemistry since that was a natural progression for me now having a specialty in digestive physiology. I was interested in science still, but what I struggled to reconcile was the ways in which my academic experiences reflected ‘scientists are old white men’ too,” she said.

After wrestling with her thoughts and seeking guidance from her former Pensacola State chemistry professor “Doc” (the late Bobby Roberson), Dr. Likely said she knew it was time to focus on science education.

“I no longer wanted to continue science research or testing from behind the lab bench. Rather I sought to expand ways students of color saw themselves represented by developing science curriculum and activities” she said.

It was a difficult decision but Dr. Likely said the best one. Changing directions was not out-of-character for her.

After graduating from high school, she initially wanted to attend Rutgers University in New Jersey. The cost of out-of-state tuition was eye-opening, and Dr. Likely chose to attend UNF, where she had received a merit-based scholarship.

“The day before move-in with the car packed and gathering the last few ‘road-trip snacks,’ I told my mom ‘I don’t wanna go.’ She said ‘OK, tell your daddy’ and that was the end of the trip to Jacksonville,” Dr. Likely said.

“I enrolled at PSC the next day. I did not know as much about the programs at PSC as I did about Rutgers or the University of North Florida. All I knew was my mom worked at the College in HR, where the libraries were located, and that she knew practically everybody. What I soon learned was PSC had everything I needed for my first two years of college. I had overlooked a gem.”

The decision worked out great. Dr. Likely said she was able to transition into a new way of life while living at home.

“Pensacola State helped prepare me for UNF in a way that all of my college transitions did not happen at once,” she explained.

Dr. Likely said her advice to other young women, particularly Black women, who are interested in STEM is that “STEM spaces, careers, research labs and classrooms need you!”

“There are many Black women and women of color in STEM, but they are not visible or not promoted to leadership positions. This is slowly changing, but the time is now to continue to push what we currently understand as STEM disciplines to be inclusive of the work of all people,” she said.

“I have been the only Black woman in many STEM spaces and it is particularly intimidating to be surrounded by people who do not look like you, do not share similar cultural interests as you, and seemingly have no interest in areas of research you do or you as a person. STEM crucially needs to be reimagined and expanded to represent the contributions of many people… We can only transform the disciplines with those who are passionate about diversity, desire inclusion and want to see safe STEM spaces for all.”

Also while at Drexel University, she contributed to the development and implementation of seven different science curricula across the Greater Philadelphia area. More than 400 elementary and middle school students participated in the science programs – two of which were funded by U.S. Department of Education grants.

Dr. Likely also is the daughter of the Rev. Robert Likely, and proudly tells the story of how her parents met while students at Pensacola Junior College more than 34 years ago. She has one sister, Rashaundra, who also is a PSC alumna, and a brother, Ricky, an 11th grader at Pensacola Christian Academy.

Dr. Likely credits her family with keeping her grounded and reach goals.

“My parents have always told me to apply myself and do my best. They entertained all of my questions and helped me study for tests. They even posted a microbiology test on the fridge,” she said. “… My sister also has been a tremendous support as I continued my education through grad school, working for the Department of Health, and then back to a doctorate program. Knowing that she is proud is one of my greatest joys.”

Dr. Likely also said her grandparents, aunts, uncles and cousins have all been tremendous cheerleaders. As a child, she said she probably talked way too much but was never silenced or ignored.

“If they did not have the answers to my questions, they provided the resources and support for me to find the answers. The ways my entire family cultivated space for me to fully be myself and explore is the reason I am a proud graduate of Pensacola State College, the University of North Florida and Drexel University.”