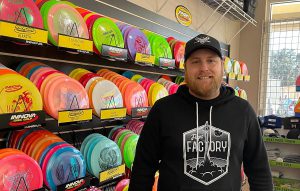 He is also one of four board members of the Emerald Coast Disc Golf Club, a 150-member disc golf group which established the Gator Links and Pirates’ Cove disc golf courses on the PSC Milton campus in the mid-2000s. He organizes numerous disc golf tournaments each year, including the first ever Lumberjack Open at the PSC Milton campus this past October. The tournament ran in conjunction with the College’s annual Lumberjack Festival. More than 100 people played in the inaugural tournament.

In January, Ryan presented two $500 checks to the PSC Milton Outdoor Club, one a donation from Flight Factory and the other from the Emerald Coast Disc Golf Club.

“For the Emerald Coast Disc Golf Club donation, we raised that over the years with (tournaments such as) the Gold Rush and Trilogy Challenges we have ran there,” Vann said. “We all voted and felt the donation was appropriate and would help the school.”

Vann made a separate donation on behalf of the Flight Factory because the business hosted four disc golf events at Gator Links and Pirates Cove in 2021.

“PSC was good for me,” said Vann, who earned an Associate degree in business from PSC in 2010. “It was the best path for me at the time.”

He then transferred to the University of West Florida and still needs eight classes to complete his bachelor’s degree in business. Vann also works as a manager at Pen Air Federal Credit Union.

“I think PSC helped because in the general business classes, there was a lot of management focus,” Vann said. “I manage a team of 15 at Pen Air and when I’m not there or home, I’m here at the Flight Factory. I learned about marketing and things that help me everyday with this business from PSC.”

Vann, a married father of three, also spearheaded the creation of the new Pat Lunsford Blackwater Disc Golf Course in Milton. He also designed the course.

Disc golf has been one of the fastest-growing participation sports during the pandemic and Vann and the Flight Factory are seeing that growth first hand.

“Every day, I’m seeing people in the store that I haven’t seen before,” Vann said. “Some come in and literally ask ‘What is disc golf?’ It’s great for all ages and you don’t have to run a mile, even though it is physically demanding.”

Vann said he hopes to strengthen the relationship between the disc golf community and PSC, especially since so many disc golfers play at the Milton campus each week.

“I want to keep building that relationship with PSC and the Milton campus,” he said. “I think there’s a lot we can do together.”