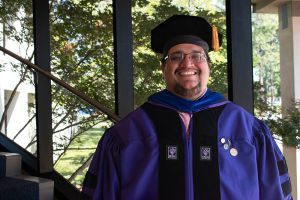 Yeah, we don’t know what that means either. If you want to find out yourself what all that scientific mumbo-jumbo translates to, you can ask Bailetti on Aug. 29 when he will speak at Pensacola State College’s Chadbourne Library. The discussion will center on how Pensacola State (Pensacola Junior College during his time here from 2006 to 2009) helped the Peruvian transplant navigate a new world and succeed in academic life. (But he won’t mind a science question either.)

Now 31, Bailetti is now a postdoctoral fellow at Stanford University, where is he is researching and investigating genetics, genomics, cell signaling, gene transcription and chromatin modification. (Go ahead, look it up. We had to.)

“I’m lucky, I’m blessed,’’ said Bailetti, a first-generation college student whose parents came to the United States from Peru in the early 2000s to provide better educational opportunities for he and his sister, Maria Pia Bailetti.

A 2011 Pensacola State grad, Maria Pia Bailetti moved on to the University of West Florida and, later, Barnard University in Manhattan.

“That’s why my parents moved here. For us,” Alessandro Bailetti said.

After earning his associate degree in math from Pensacola State in 2009, Bailetti attended Cornell University where he earned his bachelor’s degree in biological sciences. Bailetti then received a master’s degree in science from New York University’s School of Medicine, and earned a doctorate from the same school in 2019 before moving on to Stanford for his post-doctoral work.

Bailetti credits Pensacola State with preparing him for his future academic success.

“The professors and staff cared about me as an individual,’’ he said. “When you have people who care about you as a person, and don’t just see you as a number, you can accomplish anything you want to accomplish.”

He remembers his first day on the Pensacola campus.

“I was walking around like a chicken without a head,’’ Bailetti said, referring to his confusion in trying to navigate the admissions and registration process. That’s when Kimberly Calloway, an academic advisor and life skills counselor for Student Support Services at Pensacola State, took charge.

“She literally took my hand and took me from one place to the other,’’ Bailetti recalled. “She helped me get my first scholarship to summer classes. She took me where I needed to go to pay the fees. They set it up so I could meet with my department head. I made so many connections with her help. That would have not happened if I was just walking alone.”

Student Support Services is just one of five services offered by the College’s TRIO program. A federally-funded program, TRIO is designed to encourage enrollment in postsecondary or high school education programs. The programs serve first-generation college students, such as Bailetti and his sister, as well as students from low-income households, veterans and individuals with disabilities.

“My parents didn’t move her to compete with the Johnsons,’’ Bailetti said. “They sacrificed to give us a better future. They worked their behinds off – two jobs, overtime. Whatever was needed.”

It was on his family’s farm in Pisco, Peru, that a young Bailetti was first introduced to the scope and breadth of science.

“I always remember my father and my grandfather using basic genetics to make better cattle, better crops,’’ he said. “The first time I saw liquid nitrogen was on the farm. I always found that fascinating. Science is everywhere and everything.”

“We are just so proud,’’ Saez said of her children. (Maria is an occupational therapist.) “It was very hard for us. My husband didn’t speak English. I didn’t speak much. But we were always behind them and wanted them to succeed. That’s why we came here.”

When he speaks to the Pensacola State students on Thursday, Bailetti promises to “speak from the heart.”

“One thing I want them to take away,’’ he said, “is knowing that the sky is the limit. No one should put a limit on your success. You are the builder of your own success, and PSC can help you reach your potential.”

Pensacola State grad Alessandro Bailetti will speak from 2 to 3 p.m. on Thursday, Aug. 29, in the Zaragoza Room at Chadbourne Library, Building 20, on the Pensacola campus. There is no admission fee.