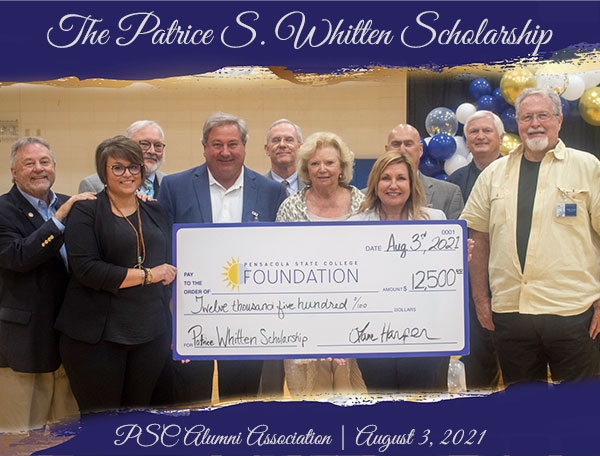 She remained a leader at PSC for decades, and now Pensacola State College even has a scholarship in her name.

The event in the Milton campus L.I.F.E. Center was a surprise to Whitten, who had no idea of the reception or the scholarship, which was funded by her family and friends and matched by the PSC Alumni Association. The scholarship endowment is $25,000.

“There’s not a place at the College she has not touched,’’ said Hailey Lotz, who replaced Whitten as PSC Alumni Association director. “The money she has raised throughout her time at PSC has helped so many students go to college and has helped to fund building projects like the Chadbourne Library and the Anna Lamar Switzer Center for Visual Arts. Patrice has done so much and given so much for Pensacola State it is perfect that we can honor her in this way.”

While at the PSC Foundation, Whitten raised more than $24 million and conducted the first comprehensive capital campaign in the College’s history. Her work and leadership helped establish 342 new scholarships and endowments at the College.

PSC President Ed Meadows said Whitten “has given much of her life to this institution and has changed thousands of lives through her hard work, leadership and service.”

Dozens of Whitten’s PSC friends and colleagues, as well as many family members and friends, attended the reception.

How’d they lure her there? Well, Whitten’s still an Alumni Association board member and there just happened to be a meeting at 5 p.m. at the Milton campus. After the meeting, she was told that all the board members had to go over to the gymnasium for a picture. Waiting for Whitten when she arrived was a party set-up featuring her friends, family and colleagues, as well as a barbecue buffet, and a display of dozens of pictures of Whitten – some of the photos featured her alongside some of the guests in the room.

The Patrice Whitten Endowed Scholarship was announced on Aug. 3 at a surprise reception for Whitten, who recently retired as PSC’s Alumni Association executive director and Special Assistant to the President. She previously served 18 years as the PSC Foundation executive director. Before that, she served two years as PBS Development Director for WSRE-TV at PSC. 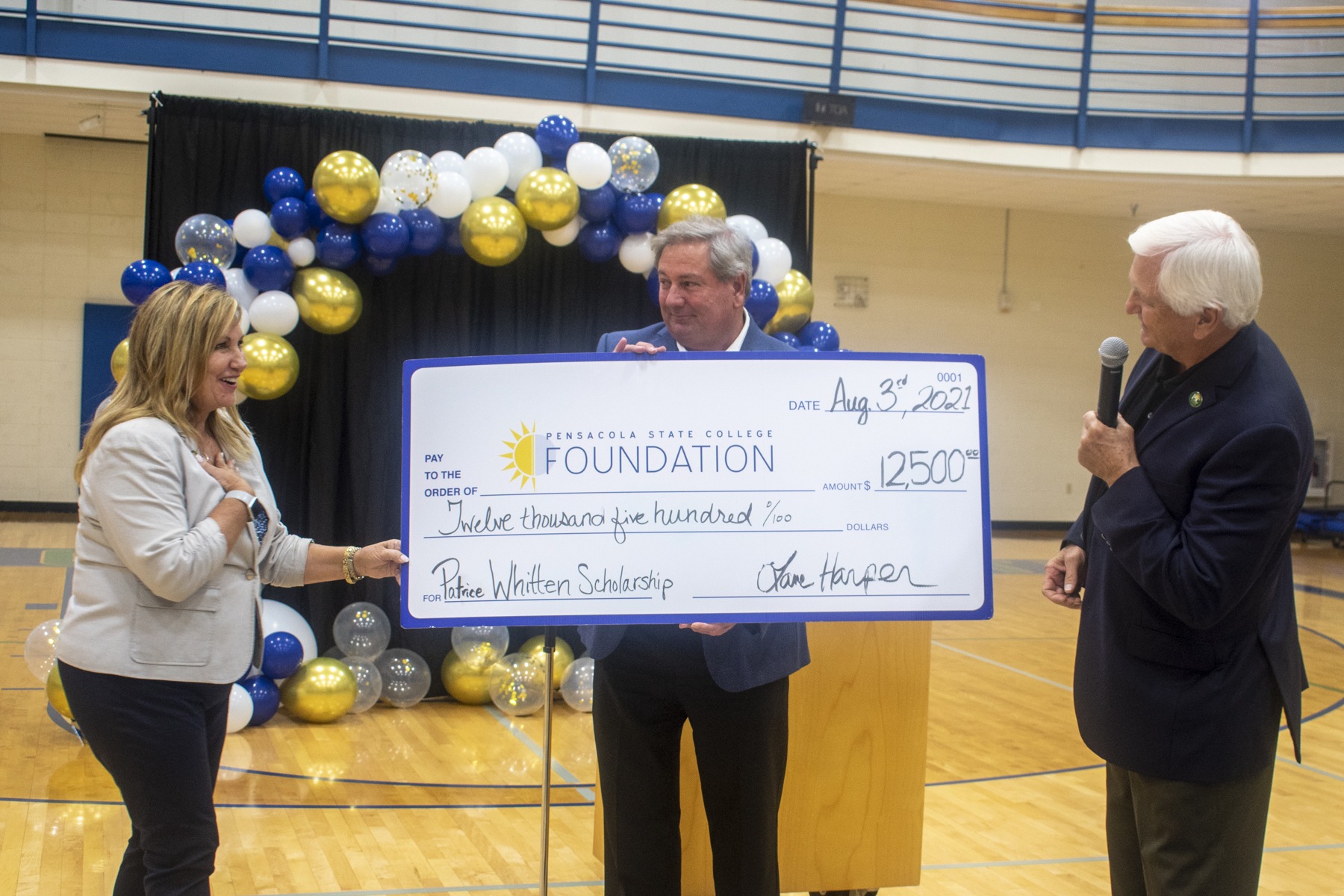 “I’m stunned,’’ she said, a large smile traced across her face, as the guests applauded. “I can’t believe this.”

Roxanne Lavelle, one of Patrice and Larry Whitten’s five daughters, and a PSC web administrator, is pretty sure Mom didn’t have a clue what was happening – from the top-secret hootenanny to the scholarship.

“If she does know,’’ Lavelle said, “then she has the grace to not let us know.”

Whitten was gracious and grateful when she spoke to the guests.

“We have done something that is truly lasting, those of us in this room and others out there in the community,’’ she said, referring to PSC’s many friends and financial backers. “I have a sense of gratitude that we have been able to work in this philanthropic endeavor together.”

Her friend, and PSC Board of Trustees chairwoman Margie Moore, called Whitten “a fireball.”

“She has a passion for our College,’’ Moore said, noting it was fitting that Whitten would now have a scholarship in her name after helping develop hundreds of scholarships that have helped thousands and thousands of students. “The wonderful thing about this scholarship is that you will have a lasting legacy at Pensacola State College.”

Whitten recalled a meeting she had with Meadows years ago in which she told him: “You know, this is my College, these are my friends, and this is where I want to stay. I am so pleased I was able to finish my career in a place I truly, truly love and which is a place that does so much good in our community.”

For those asking how you can contribute to the scholarship: