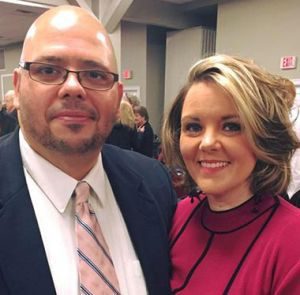 “I didn’t graduate from high school. I was 24 years old, and a friend of mine said, ‘You think you’re so smart. Why don’t you go take your GED and try to pass it?’” said Ronnie Rivera.

Rivera suggested the “right mix” of social problems and family dynamics led to him to drop out of Escambia High School, but he takes responsibility for his choices.

“I can put the blame on anybody, but the reason I didn’t finish high school was because of me,” he admitted.

Rivera took his friend up on the dare, and after several months of study and review, he took the pencil-and-paper test. He earned his GED diploma in 1995.

That same friend challenged Rivera again, this time to take a college course. Rivera could not afford to pay for a single class at Pensacola Junior College, and he could only secure a grant if he took a full course load, so he signed up for 15 credit hours.

Rivera was not only a first-generation college student. Neither his parents nor his grandparents had graduated from high school or earned equivalencies.

“We were dirt-floor poor … but that GED, it opened up every other single door,” he said.

During his first two weeks of college, Rivera said he was scared and felt out-classed, but soon he settled in and found his instructors were supportive.  He said they pushed him to succeed, even if that meant a few failing papers.

“They challenged me and they moved me along and they sometimes failed me and that was OK. It was OK to fail because that’s how I learned,” maintained Rivera.

A few instructors stand out in Rivera’s mind as having played a pivotal role in his success. He mentioned Mark Cobb, who now teaches at the University of California, Santa Cruz, and Pensacola State instructor Charles Schuler.

“Anything I needed, their doors were open. If I had a concern on a paper, I would just run it by for them before I turned it in,” he said.

Not all of his instructors were so friendly.

“I had one English instructor who was super mean. I’ll never forget her. She taught me how to write well … not ‘good …’” Rivera chuckled. “I did exceptionally well, and really did find my mark academically for the first time.”

Finding academic success at PJC inspired Rivera to help others. He took his first professional job as a tutor at PJC and would assist with remediation for the TABE test. He was able to earn a few extra dollars to supplement what he called his “non-income.”

Rivera graduated from PJC with an associate degree two years after taking on that friend’s dare, but now he was learning to hedge his bets.

“Once I got adapted and I felt comfortable, it gave me that ability to think, ‘Hey, I can go to Florida State and make it.’”

He received mixed messages from his family, though.

“Oddly enough, when I first started at PJC, Mom was discouraging of me going to college. She didn’t understand,” he explained.

“You always hear that college can change your life but you don’t really understand it until the process is over,” Rivera said. “When I got to Florida State (University) and started standing on my own, she stared coming around to the thought that this is a really great opportunity.”

Rivera earned a bachelor’s degree from FSU in 1999, then returned to Escambia High School, this time as a teacher.

“I loved working for the district, but the kids that I wanted to serve – the district at that time was kind of getting away from that kid,” Rivera said.

When a position came along managing the Able Trust locally for Goodwill Easter Seals, which allowed him to assist incarcerated youth and those with disabilities with vocational rehabilitation through the organization’s High School/High Tech program, Rivera said he felt it was a good fit.

“Out of the five years I was there, three years I won some type of award for the best in the state in a variety of different topics. I didn’t think I was ever going to leave there,” he said.

Rivera did leave the position, but continues to fulfill his passion for service as the President and CEO of the Jim C. Downey Community Center project.

“If you’ve ever seen the movie, ‘I Bought a Zoo,’ it’s very similar. I bought a nonprofit,” he said.

He also is involved in a number of community-oriented organizations, including serving on the Escambia County Tourism Development Council and as the chairman of the Myrtle Grove Revitalization Group.

Rivera and his wife Christal, who is also a PJC alumna, have two daughters, Angel and Mallory.

Rivera says the Pensacola State motto, “Go here. Get there,” is an apt description of his journey.

“It does take hard work. It does take self-sacrifice. I missed many parties, many nights out,” he said. “But people assured me along the way that you really can get there from here.  It’s so encapsulating of what Pensacola State is.

Rivera’s “there” continues to exceed even his own expectations. He is pursuing his Master of Public Administration and Service at the Bush School of Government and Public Service at Texas A & M University.

“That’s where I’m at now. I’m doing well academically in a master’s program … it’s the seventh hardest program in the nation,” he said.

Rivera said he still has a hard time believing it is real.

“Here I am in a presidential library at the Bush School of Government, surrounded by some of the greatest minds in the nation in service and public management, and thinking, ‘That’s a long way from the GED, man.’”