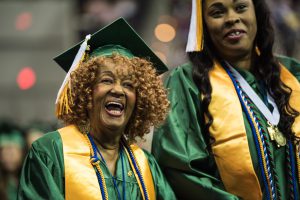 When Barbara Walker decided to enroll at Pensacola State College midway in her 50s, she was concerned about whether she’d be able to handle the stress, the workload and all of the youngsters she would be surrounded by.

She was worried until she saw Catherine Moore, an 86-year-old great-great-grandmother, sitting in the front row of their African American literature class.

They don’t call her “Cathy” in class.

“That would be disrespectful at her age,” said her African American literature instructor Paige Anderson. “We have to call her Ms. Cathy.”

On May 7, Ms. Cathy will receive her associate degree in psychology from Pensacola State College. So what’s she going to do with her degree after graduation?

While most college graduates are working toward a future career, Ms. Cathy is just realizing a lifelong dream.

A Harlem native, she dropped out of high school after 11th grade to get married.

“I always felt I missed out on something,” she said. “But it’s a goal I’ve always wanted to achieve.”

She enrolled at PSC three years ago.

“It’s a two-year degree, but it took me three years because I didn’t want to overburden myself,” she said. “I wanted to succeed.”

Ms. Cathy has a 3.56 grade point average and is a member of the Phi Theta Kappa Honor Society. She had one child, a son, who passed away, but not before giving her seven grandchildren.

She admitted she was nervous about returning to school after so many decades.

“I was really kind of intimidated and scared,” she said. “But I’ve received so much support. Everyone has been so helpful, and it’s made me feel confident in myself.”

She said she loves being surrounded by younger people.

“I have new respect and admiration for these young people in school,” she said. “Some have families, children, two or three jobs and they’re carrying three or four classes. It’s amazing to me.”

And she’s amazing to them as well.

“She’s my hero,” said fellow student Georganna Hess. “She smiles every day, and if I’m not smiling, she’ll ask me what’s wrong and that alone makes me smile. She’s amazing and truly an inspiration.”