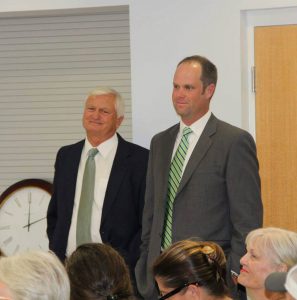 Pensacola State College and the Athletic Department is pleased to announce the hiring of Bryan Lewallyn as the Pirates’ new head baseball coach.

Lewallyn, a former Pirate, has most recently been the head coach at the University of South Carolina – Beaufort, leading the Sand Sharks to three NAIA Regionals in five years, four Sun Conference Tournament appearances, one Sun Conference Championship and a 2012 NAIA World Series appearance.

In addition to his time at USCB, which includes one year as the assistant/pitching coach/recruiter, Lewallyn spent time with the New Orleans Zephyrs AAA team, and was the pitching coach for both Northwest Florida State College and the Pensacola Pelicans.

In addition to tournament and conference successes, Lewallyn set the school record for wins twice in five years with USCB. He led the Sand Sharks to 41 wins in 2012 and finished ranked No. 7 in the nation. He followed that up in 2016 with 44 wins and a national ranking as high as No. 5.

Lewallyn is a graduate of Pine Forest High School, Pensacola Junior College and the University of Central Florida. He and his wife, Emily, have a daughter, Ellis, who will be four years old in December.

For more information, contact Sheila Nichols at 850-484-1428 or snichols@pensacolastate.edu.